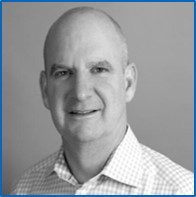 Chris is a serial entrepreneur. He was Co-Founder/President of Imagitas (which commercialized and digitized the USPS change of address form, acquired by Pitney Bowes), and Co-Founder/VP of PatientPoint (which was born as On Target Media, and acquired by Alta Communications). He is currently Chairman and CEO of Linkwell Health, a leading digital content marketing company in healthcare, which works with payers, providers and health services companies, and is part owned by Anthem.

For 10 years, Chris served on the Board of nonprofit Jumpstart for Young Children, where he spearheaded Jumpstart’s Read for the Record campaign, which set the world reading record. He is a Co-Founder and Board member of Silicon Couloir in Jackson, WY, whose purpose is to align entrepreneurship with community vision.  Chris is a past Chairman of Everyartist.me, which put on the largest community art event in history.  He is a two-time cancer survivor and a past member of the Mass General Hospital Cancer Center Leadership Council. He is a member of the Board of Directors of the Procter & Gamble Alumni Foundation.  Chris began his career with Procter & Gamble in the Healthcare Division and graduated from Dartmouth College with Honors.  He splits his time between Beacon Hill (Boston) and Jackson, WY.