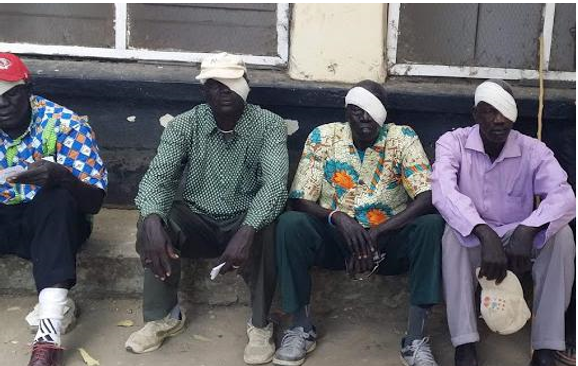 Health eVillages’ partner, Partners in Compassionate Care (PCC) recently conducted its second Cataract Camp in Bor, South Sudan. The camp was 14 days long and included a surgical team and trained community eye workers.  Nearly 700 blind and visually impaired patients made their way to the hospital – many using the services of the Health eVillages’ ambulance.

Initially, surgeons at the eye camp were set to perform 250 surgeries, including 200 cataract and 50 trachoma surgeries within 14 days. However, the team was successful enough to perform 307 surgeries total.  The team screened 674 patients in just two days, 65% of which were female.  Two hundred and sixty-one of the patients screened were confirmed to have mature cataracts and more than 90% of them were bilaterally blind from cataracts.  Trachoma trichiasis, the most common infectious cause of blindness caused by inflammation and scarring of the surface of the eye, affected 44 of these patients.  A significant group of other patients were confirmed to have early cataracts, advanced glaucoma, trachoma corneal scars, refractive error and many more dangerous eye conditions.

PCC has established itself as being “the only hope” for the blind living in remote communities in South Sudan.  Since 2018, PCC has restored sight to 501 people, giving back independence and hope to those who had no place else to seek care.

PCC plans to host a similar eye camp in another remote community of South Sudan, as the funding allows, as well as another 14-day eye camp in Bor with a target of 300 cataract and trachoma surgeries.  They also plan to purchase additional operating microscopes, as well as develop a static eye clinic at the PCC Health Centre in Bor to help minimize backlog in the area.  Lastly, they plan to screen at least 800 more patients at each camp and increase the number of qualified individuals on the surgical eye team.

Health eVillages is grateful for our partnership with Partners in Compassionate Care – an organization, like ours, dedicated to healing-the-villages.