Press Releases & Blogs > Whose story is it anyway?

Whose story is it anyway?

When it was finally decided that we would be visiting Uganda, it involved some preparation. We were to go on a mission to deliver devices for Angels of Hope and RMF South Sudan (which would be sent to Juba by road from Kampala). Amongst the 3 of us we carried 22 devices in total (18 to RMF South Sudan and 4 for Angels of Hope). Apart from ensuring procurement of devices and having them uploaded with content, we had to prepare our bodies and minds. Our bodies got shots as protection against different illnesses. In times of uncertainty where you do not know what to expect from a new place you visit, keeping an open mind can be one of the best ways to cope with the experiences that unfold.

In all honesty, before this visit, the thought of Africa always rang certain bells in my ears. These thoughts are stereotypes most people possess. Many of us do not even know it as a continent with diversity. A lot of us still talk of it as a country. The thought of Africa still evokes pity and resonates catastrophe. A TED talk by writer Chimamanda Ngozi Adichie – ‘The danger of a single story” has been instrumental in shifting my perspective about the ‘idea’ of places, people and culture. It has also been my lessons from hearing this writer talk that made me enter Uganda with an open mind to absorb and learn. The experiences I will be sharing in this post would not have been what they were if I had not surrendered to the unknown and shed my preconceived notions.

The consequence of the single story is this: It robs people of dignity. It makes our recognition of our equal humanity difficult. It emphasizes how we are different rather than how we are similar. ~ Adichie

Our first field visit was to the Kiryandongo Refugee Settlement in Bweyale, Uganda, which is a UNHCR-managed refugee settlement that provides shelter, land and support to more than 25,000, composed of Ugandan IDPs and refugees from Kenya, Congo, Rwanda, Burundi and Sudan. Real Medicine Foundation is one of the implementing agencies for education, health care and vocational training. The team there gave us a very warm welcome with a lot of smiles. We visited primary schools, secondary schools, the community clinic and the vocational training center. With the increasing influx of people coming in as refugees every day and the limited resources at hand, there was always a dilemma being experienced about scaling programs. The students at one of the primary schools were playing football when we reached the site. But they were not kicking around a regular ball. It was a makeshift ball made up of locally available waste materials such as cloth and plastic all tied up into a mesh.

This taught me that solutions for problems can be designed by those who are experiencing them – even if we may think they are in no position to do so themselves. It is a good lesson to learn especially in the international development context where the approach is top-down, where we assume we know better what the ‘beneficiaries’ (I like the word users/ clients/ customers better) require than what they may actually need. The knowledge of those experiencing a certain reality can be very valuable while designing programs for them.

Being a spoken word poet who believes it can be a medium to create change in society, I had often times written pieces highlighting social issues. In my piece on busting myths on ‘Menstruation’ I had written about an article I had read as part of a research study. In that, a 16-year-old girl from Uganda (who dreams of becoming a doctor some day) stops going to school because her school does not separate toilets for boys and girls or have comfortable facilities for sanitation. This still holds true but it is not the complete picture of girls going to school there.

During my visit to the Buwate Sports Academy that works with youth in Buwate and Kireka communities, I met with a group of energetic and inspiring girls who form a proud football team. They welcomed my arrival with singing a few English songs and dancing to the beat of drums. This group of girls who are probably in the age where they are just entering puberty / have already been experiencing it were running around in the sun and in the mud playing their game. The entry of this sports academy has changed all their lives in many ways. They come from communities where life could be quite challenging and this sport has given them an outlet to channel their energies and put it to good use for their body and mind. This was also a great model to learn from as it directly impacts mental and physical health of the children using sports as the medium. All these kids perform better and stick to going to school because they are active and engaging themselves at sport.

This is a story that must be told. Their songs too must be sung. It is not enough to talk about what does not happen or what happens in the wrong ways. This trip made me realize that we must also be talking with equal vigor and passion (if not more) about development efforts that may not directly fall into categories that attract a lot of attention. 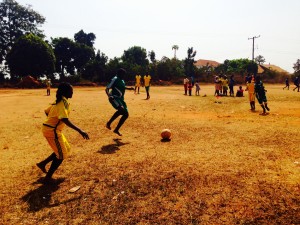 It is impossible to talk about the single story without talking about power. There is a word, an Igbo word that I think about whenever I think about the power structures of the world and it is “nkali.” It’s a noun that loosely translates to “to be greater than another.” Like our economic and political worlds, stories too are defined by the principle of nkali: How they are told, who tells them, when they’re told, how many stories are told, are really dependent on power. ~ Adichie

We spent the Friday at Angels of Hope on the day of immunization. Observing first and then stepping in to help them in any way we could, Bonnie, Deb and I took turns packing medication prescribed by the doctor that had to be handed over to the visiting patients. The iPads were being used creatively by Angels of Hope to screen informative videos for the patients who visited. Deb noticed this and came up with a great idea. Why not play some songs to engage the children? We played the usual rhymes we find on YouTube that all of us may have learnt at school at some point. These videos (even though animations) do not represent realities of the children living in those communities. This is not to say the kids were not entertained, they really had a great time. I was certain then that stories are told by those who have the power and the voice to express it. And a lot of what we see in mainstream media does not represent everyone equally.

As I sat there amidst all the women who had come with their children to the hospital, my mind had already started to run towards this blog post and what is the ‘story’ I want to write about. Then something struck me. How would I like it if somebody visited me and did not involve me much in writing about me? Would they be able to paint a picture of me that resonated with my reality? What reality would this be? Would it merely be their perception of me or an informed storyline of my lived experiences?

What if these women and children had the voice to tell their own story?

Would we understand much more about who they were and what their lives were like?

There is only one way to find out.